A small company from Cheshire, UK that was started by the Briggs bros. believes in a small and efficient working force. So it took a team just of 8 people to build the radical BAC Mono. With only a brief glance, other cars would WOW and believe that this is what future holds for them.
So in the unlikely moment of your busy life you may ask yourself- How many Google workers does it take to make a car? Well it’s 15 apparently. Seven more than BAC and yet you can’t even drive it.

Now I’m shedding light on what is more of a bottled up frustration in petrol heads like us- the birth of autonomous vehicles or better known as “driverless” cars. This epiphany could be a controversial one and I sense some abuses and counter arguments being thrown at me by the end of this read, but I’d like to take my chances here.

With technology always on the rise, I understand that this is certainly a hoorah moment for Google’s computer geeks and programmers who can feel proud of running a car for 300,000 miles (without crashing) by just few lines of coding. But there is a question that the automotive world is asking and nobody seems to be paying attention- Is there really a need for such a technology? Watch the video below to know Google’s skunk works.

For almost 40 years and more now the environmental agencies and local tree huggers have been pointing fingers at the auto industry for being one of the main sources of greenhouse gas emissions. And since then cars have been compromised on all sorts of other things just to pollute lesser. Car bodies being more slippery for lesser drag and hence lesser fuel consumption, composite materials to reduce weight, infinite iterations on engine design, fuel metering systems and changes in fuel composition itself; if you pick up a magazine, you’ll be convinced that we (the automotive industry) have almost perfected this world and that we’re only going to get better at it.
So how exactly is Google planning to appease UNEP, IPCC, WNO etc. by making a driverless car?

Firstly, lets throw our fears out. I’m not doubting the abilities of Google, but then I’d never want to let a computer control all the driving functions of my car and run it in “autopilot” mode. The last time I let computers take control of my life, I almost ignored a small earthquake just so I could finish first in this racing game called POD. Looking at the aerospace industry and how they haven’t been hasty about having self flying passenger planes is something truly to be appreciative of their progressive approach towards perfection.

Our automated cars use video cameras, radar sensors and a laser range finder to ‘see’ other traffic, as well as detailed maps to navigate the road ahead.

On Google’s official blog it is mentioned so. Google also mentions that about 750MB of data is analysed and collected by the on-board computers every second. Such heavy dependence on these wired friends makes me wonder if Google have considered what would happen if their car is subjected to a large Electromagnetic Pulse (EMP) field. All the brains of the car would seize at quickest moment bringing the car to a “ctrl-alt-del” moment. 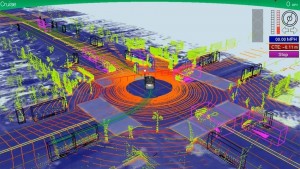 In another feat by Google in trying to explain and impress their technology to the commoners, they recently uploaded the image of what the on-board computer “sees” while making a turn. One of the software developers said- “If it sees a cigarette butt, it knows a person might be creeping out from between cars. If it sees a rolling ball it knows a child might run out from a driveway.”

Making sensors that sensitive and softwares with such complex algorithms is like making the exact same mistake the car industry made decades ago. The best example would be the pressure sensors of air bags and how researchers are trying to “de-sensitize” these sensors so that the air bags wouldn’t blow up in the cabin for the smallest of bumps like when a car tries to mount the curb.

With three of such insignificant incidents discussed above, how then does Google chose to stay true their word about cutting yearly road accidents by as much as HALF with such technology? The more you dwell in this topic, the more it makes you feel that Google decided to adopt a Toyota Prius and just strap some Google equipment without really learning from the pioneers themselves.

Audi with its A7 boasted of an almost convincing video of a self parking car that drops the working man at the lobby, seeks out for a vacant parking spot, hibernates, and at the touch of a button is back in the lobby, ALL BY ITSELF!
But notice closely and you’ll notice lot of loopholes in this concept – what if the phone battery dies out and you cant override the code to open your car? What if the closest parking spot that the car finds is at least 7 miles away or worse, what if it can’t find a parking spot at all and then cause havoc on city streets? What about the heavy battery consumption required to run such electrically dependent auxiliary systems that might drain the charge if parked for too long?

In fact, Mercedes even though they are uber confident about their “steering assist” in the 2014 S-Class (Yes, 2014!), which is another name for autopilot mode, emphasised that the autonomous drive (or steering assist) will only work as long as the driver has his hands fixed firmly on the steering wheel, and that it cannot tackle turns by itself after a certain speed of 40kmph.

All of this should help Google understand the automotive industry’s progressive approach towards better mobility. Clearly, Google haven’t done their homework.

So dear Google programmers, look through your “glass” carefully (pun intended) and understand that automotive technology and mobility should be left in the rightful hands of our people as shown in the image below. 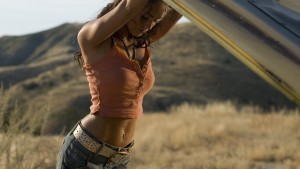 And if you do chose to continue this project, could you at least choose a less hideous car than the Prius? M4 maybe? I’m sure that blind man you brought along as your test drive for that driverless Toyota would’ve loved to “feel like driving” a sexier car than a Prius.