Motorsports to me is where the human passion for adventure, propels its proponents to constantly push the limits of automotive technology and their own willpower to redefine the speed. Which explains why, despite being prohibitively expensive, motorsports is the most popular sporting spectacle around the globe. But obviously to live your passion and to compete in a racing extravaganza one has to have a proper race car too. That’s why 4 years back, young mind’s of VIT university decided to start a Formula SAE team Pravega Racing, which is now globally known as one of the best offerings of the country to the extremely competitive Formula SAE arena.

Formula SAE was conceived in 1978 by the Society of Automotive Engineers and has steadily grown from a just handful of US teams to 600 teams worldwide. The best engineering institutions compete against one another with one goal in mind: To be the best in the world. 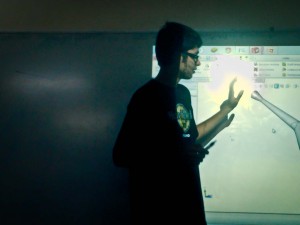 Students come together to design, build, and race a Formula-style race car. A new car is created every year. Team members think constantly about the improvements on the car, and what will make the current year’s car outperform the last. But there is no way yet to bypass the laws of thermodynamics, drag coefficients and tire slip angles and most of all making a FSAE car is not a personal project, it’s a multidisciplinary effort which requires experts from each discipline to sit together, brainstorm and find best engineering solution possible, hence in that regard Pravega Racing had its first design review of the current season on the 10th of February,2013 where each department revealed their goal for this season and also the approach they have adopted to ensure that the goal is achieved so as to compliment the extremely tight schedule they have to follow in order to complete the car in time.

Apart from the intense technical review where the entire team discussed, argued upon and polished every design and technical decision down to the tee, another very interesting and exceptionally fruitful discussion was when the entire team sat together to solve the biggest problem of them all, how well does what we do technically fit the bigger picture? There has to be a vision that the team is following, something that the entire process of designing, manufacturing, testing and racing leads to. 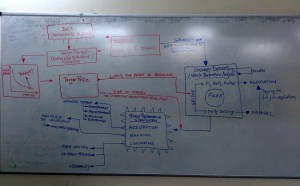 Without that image all those efforts would be nothing more than a drop in the ocean but with this vision in mind, truly amazing things can be given shape. And after an exhausting session of to and fro the solution took form in front of them, in true engineering fashion, on a whiteboard at two in the morning. 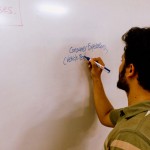 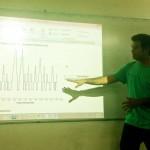 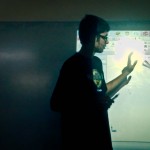