It sometimes is annoying when people say that the Bugatti Veyron series of cars aren’t beautiful or artistic enough while some go as far as stating that they look boxy and drab. I really don’t fault them, look at the Mona Lisa, a painting so good that for centuries people have tried finding fault in it. Human nature I say. And truth be told a car so poised and so “monstrously elegant” at the insane speeds that it so easily achieves, anybody would become a mumbling fool trying to find faults in it. It is a beautiful car, its beauty a partly a result of the engineering that makes the Bugatti Veyron the reigning god of the automobile world and also because of the “monstrous elegance” I mentioned earlier and partly because of the way the car unlike our other God’s of the tarmac looks you in the face and  makes you just want to drive instead of  inspiring song and poetry. 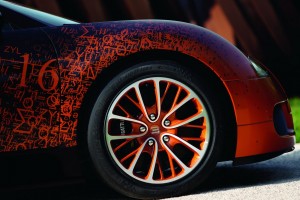 We all gaped open mouthed at model after model of the Bugatti Veyron and we saw a million different things but someone somewhere saw a canvas. And it  really didn’t end up being a simple repaint but a true paean to the engineering that went into making the car the delight it is. The equations used by the engineers that went into making the Grand Sport adorn this car and fade away towards the rear as if they were being literally ripped away because of the speed of the car. It is a long held notion that he engineering under the skin it the true art in any automobile, greats like Indian Larry have time and again tried making the engineering behind the autom0bile the basis of its design, but french artist Bernar Venet seems to have succeeded like nobody else. 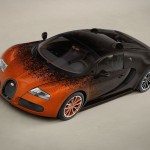 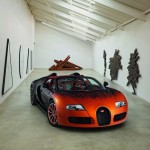 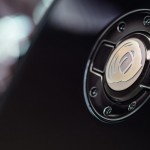 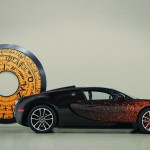 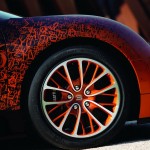