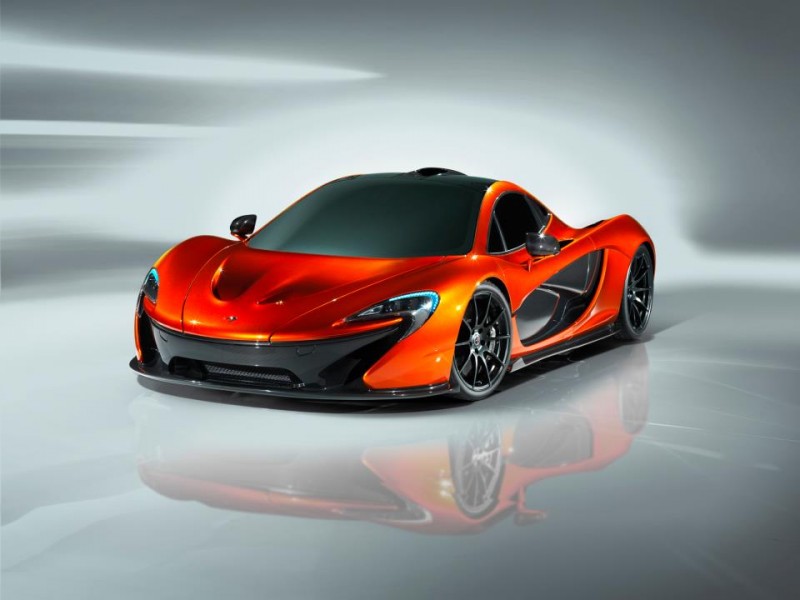 Unveiled just 9 days ahead of the Paris motor show to be held on 27th September, 2012, McLaren P1 is here for you. Dripping with McLaren’s eye popping orange, the P1’s official pictures just spread like wildfire all over the internet. The images clearly showcased the car after its teaser videos so far. Looks? My God that car is a beauty. With just a look of it, one can say the aesthetics of a mp4-12c purely studded in it, just an evolved MP4-12C to brief it up.

The powertrain has yet not been confirmed but the current speculations infer the same 3.8 litre twin turbo V8 engine as in the mp4-12c, but a little tweaked one producing an enormous 803 bhp. Adding to it is a fully functional KERS unit producing 160 bhp to a total 963 bhp. This is utterly hyper-car territory.  The unique claim by McLaren in this one was “the best aerodynamics”. The aerodynamic features include the dynamic new underbody diffusers, wide front splitters, winglets all over the side panels and rearward roof air intakes. Similar to the MP4-12C, this has retractable rear wings which work only during air brake necessity. An engineer at McLaren spoke out “every molecule of air that touches this car has a job to do”. A bold statement indeed, I will say.

Decided to go for sale from next spring, the so far called P1 will just have 500 units produced. Claimed to have a top speed of 239 mph and a 0-60 mph in 2.8 seconds, this is bloody fast. Who knows, as the previous  F1, McLaren might be limiting the P1’s top speed. Weighing about 2693 lbs, it gives a staggering 2.81 pounds per horsepower. Comparing Aventador’s 5.02, Enzo’s 4.56, Veyron’s 4.16 and McLaren’s own F1’s 4.0 lbs per horsepower, the P1 really stands out. Uniquely unique are the side windows and windshields in this car.
Made from pieces of vacuum formed acrylic similar to fighter jet cockpits, this saves 62% of weight compared to normal glass. P.S- Notice, there are no windshield wipers. This special acrylic is a true non-stick surface which rolls away water droplets hitting it. See, that’s called attention to details and McLaren’s answer to technological breakthroughs.

Hoping to just cause a wild stir around the world as the F1 had done 20 years back, the P1 is all set to be launched in the upcoming Paris motor show. All eyes are on the P1 right now. Fingers crossed. No vague responses like the McLaren X1 this time. Please!