In the old days all vehicles whether a stage coach or a train or an automobile used springs for absorbing shocks taken by the vehicle off the uneven roads. The purpose of these springs (leaf or coil spring arrangement) was to prevent the people inside the vehicle from experiencing a sudden shock when it hit a bump. However, these springs while absorbing shocks were set into an oscillation which died after a considerable amount of time.
This means that the vehicle would continue to go up and down (as illustrated in the figure below) and as a result the ride was not what we could call, comfortable. 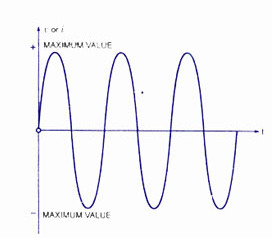 With time the automobiles started achieving newer speed limits which in turn meant that the ride comfort had to be compromised. Thanks to the engineers who thought about this beforehand and invented what we today know as a hydraulic shock absorber. In this shock absorber pressurised oil passes between the chambers (2-3) through  valves that restrict its flow. This passage of the fluid through the valves and chambers causes the oscillations to damp or die out quickly and in turn the vehicle returns to its normal state much faster. The follwing figure depicts the damped oscillation. 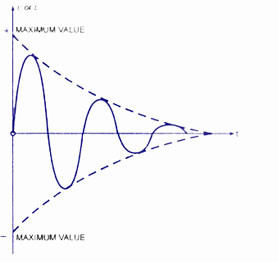 In the recent past the after perfecting the IC engines for several decades the engineers turned their attention towards ride comfort. This impelled the spawn of newer sophisticated machinery and newer materials for shock absorbers. The latest 3rd generation shock absorbers available today, usually in some high end cars use something called a Magneto-Rheological shock absorber (MR Shock Absorber). Rheological, because it involves fluid motion, and magneto beacause it uses an electromagnet. Whats basically different with this type of shock absorber is that it does not require those tiny mechanical valves and chambers to create a restriction for the oil flow.

The MR systems were first incorporated into the GM’s Cadillac Seville STS. Later, several vehicles started using it but the system has actually been made popular by the Audi’s Magnetic Ride in the TT and R8 models. The MR Shock Absorber uses a special oil filled with micrometer-sized iron particles (20-40%) and an electromagnet piston. A fluid to prevent iron particles from settling down is also added to the mixture.  The basic construction is similar to the conventional hydraulic shock absorber. The main difference being that the piston is an electromagnet with a passage in between through which the fluid flows. When the system is deactivated the fluid moves unrestricted through the passage and offers minimal ride comfort. However when the system is energized, the magnetic flux generated by the electromagnet causes the iron particles to form a chain like structure along the magnetic lines of force, just like the iron fillings that make a shape around a bar-magnet. This allignment of the iron particles causes the fluid to become more stiff or viscous and thus help in dampening the shock with a considerable celerity.

Now the main question, how does the ECU know when to switch on the electromagnet and how does it control the fluid viscosity? Well, the electronic sensors mounted on the car, to monitor the road conditions, along with the shock absorber send information to the ECU once every millisecond. The ECU responds by changing the amount of current output provided to the electromagnet. If the bumps on the road are not too severe the current passing through the electromagnet will be quite less, the magnetic flux produces will be less as well and hence the the MR fluid will have low viscosity (but quite much for a comfortable ride). On the other hand, if bumps are too severe the ECU will provide maximum current at the electromagnet’s end and hence the MR fluid will achieve its maximal viscosity. Hence at all times the ride comfort is taken care of. 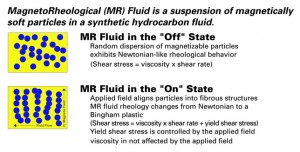 As it has been mentioned before that viscosity can be changed by changing the current flow, many of you might be wondering how would you possibly change the amount of DC current, which infact is bound to be constant? The solution to this very problem is quite simple yet elegant and is called the PWM or Pulse Width Modulation. How it works is the realm of electrical and signals engineer, but in layman’s language the computer is just changing the ON time and OFF time of the output current pulse, and as an upshot of this witchcraft at the ECU’s end, the power gets controlled and the ride just gets better and better.