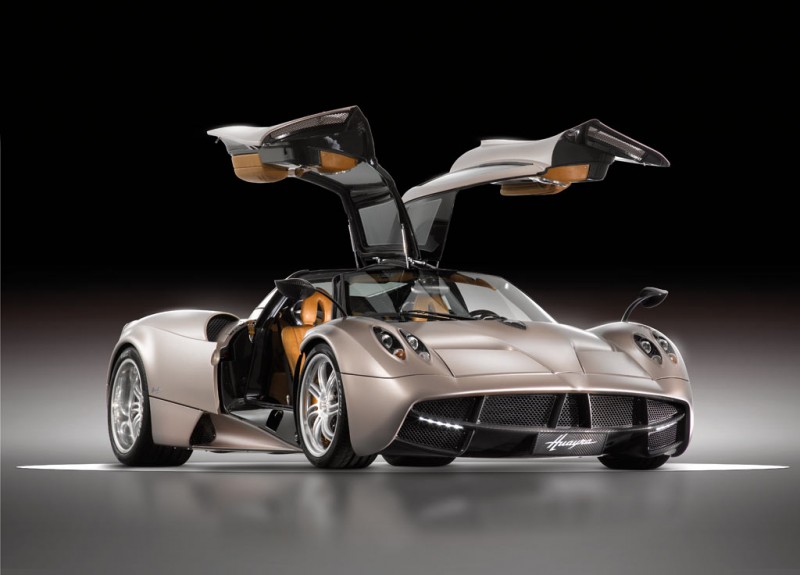 Elegant and muscular the Pagani Huayra merges the past, present and future in a timeless interpretation of automotive art.  The new Pagani Huayra has been officially revealed to the world, although few of us may ever see it in the flesh.  It is the newest flagship of this boutique Italian sports car manufacturer, a name that will replace the equally-fun-to-say Zonda.  Like its predecessor, the Pagani Huayra will be a rare bird in the world of super cars, as Pagani is expected to produce less than 40 Huayras within the first year of its production. The prices start at about $1.38 million.

Mercedes-AMG provides the heart for the Pagani Huayra. The 60 degree 12 cylinder bi-turbocharged engine with a displacement of 5980 cm3 has been developed not just to meet the strictest technical and quality requirements, but also to give the car its many faces. The calm and harmony of driving one of the world’s most refined GT car is interrupted when the driver calls upon the Pagani Huayra to unleash its 700 horsepower and 1000 Nm of torque. The turbos have been studied to offer immediate response to the slightest throttle input, giving the driver full control over the engine at any rpm and preventing unwanted delays in the delivery of power. The engine’s systems have been designed and tested to stand up to the most adverse conditions of temperature and performance. The Pagani Huayra has been subjected to the highs of Death Valley and the lows of the Arctic Circle. The power and prodigious torque generated by Pagani Huayra’s V12 are transferred to the wheels through a transverse sequential seven speed gearbox and a dual plate clutch and the complete gearbox weighs only 96 kg. The titanium exhaust weighs just 10kg.

The Pagani Huayra continues this marque’s tradition of serious-yet-smart muscle, aerodynamics without compromise and styling that borders on the eccentric. The styling of the car was perfected over the course of 5 years to find each line’s beginning and end. During this study, eight scale models were created, as well as two 1:1 models, each an evolution of the previous in a never ending quest to perfect the form and refining the substance.

The new central monocoque on the Pagani Huayra is an entirely new design made from carbontitanium. However, with the gull wing doors cutting deep into the roof, much research was focused on achieving the highest levels of rigidity through the application of new advanced composite materials and technologies first tested on the Zonda R. The never ending quest for weight reduction resulted also into the combination of structural and non-structural or aesthetical elements. An example is the integration of all ventilation air ducts into the monocoque’s structure, making the use of additional parts and ducts unnecessary. The result of this attention to detail is a vehicle weighing 1.350 kg making the Pagani Huayra the lightest sportscar in its class.

The aerodynamic concept of the Pagani Huayra is that of a wing. The vehicle can modify the properties of this wing by varying the front ride height, which can be adjusted dynamically, and by adjusting the 4 control flaps on each of the four corners of the car.

As soon as the doors are closed the Pagani Huayra transports the occupants to a new dimension; a world that pleases and surprises the senses. Having everything at arm’s length is not close enough for a vehicle with the capabilities of the Pagani Huayra. Consequently, the driver will find all primary functions directly on the steering wheel. The gearshift paddles are mounted directly to the steering wheel so the driver never needs to take his hands off the steering wheel. The seats provide both the comfort to make long trips enjoyable as well as the lateral support required when the g-forces build up on extreme driving. The high definition central touchscreen is the heart of the vehicle infotainment system, controlling audio functions, satellite navigation, secondary vehicle functions and Bluetooth phone.

Ancient legends of the Aymara tell us of Huayra Tata, god of wind, who commands the breezes, winds, and blizzards that invade the mountains, cliffs and hills of the Andean highlands. It is told that Huayra Tata resides deep in the high peaks and valleys, abandoning them only to demonstrate his power to his wife, Pachamama, goddess of mother earth. With his power Huayra Tata was able to lift the waters from lake Titicaca and rain them down on the fertile Pachamama. When Huayra Tata sleeps, the waters and rivers lay quiet. But the calm before the storm is about to be interrupted.