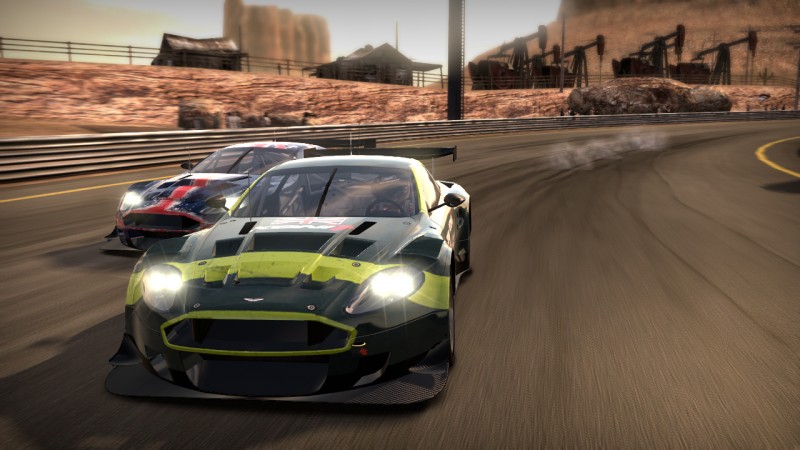 Have you ever noticed that in many car races, drivers often drive there cars kissing the tail of car in front. But have you ever wondered why is that so? You may think, as to make the race more thrilling and exciting. This could be one reason but answer lies in “aerodynamics”. Aerodynamics plays a critical role in racing. Good design can stick a race car to the track better and allow it to move faster through the air.

Hmmm… but What is Drafting?

The practice of two or more cars running nose to tail to create more speed for the group is called drafting. The car on the tail is known as car in the draft. Race cars use drafting to gain speed and to go faster by having less drag. The beginning of the technique of drafting is said to came from NASCAR racing. Racing legend Junior Johnson is acknowledged as the first driver to use drafting as a competitive tactic. In 1960, Johnson was driving an under powered Chevy with several dominant Pontiac cars on the track at that time. He noticed the while keeping his car behind the car of Bobby Johns who was driving one of the Pontiac, he could keep pace with the bigger and faster vehicles. This was the beginning of the technique of drafting.

In that race, Johns reportedly was in a drafting position with another driver and the lower pressure from the slipstream was so intense it sucked Johns’ rear window out of his car. Johns spun out and crashed and Junior Johnson won the race.

Amazing!, but what is the Physics behind drafting? 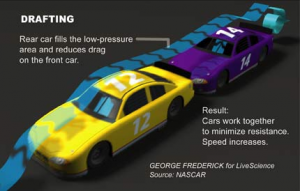 Logic behind the drafting is pretty simple but first we need to understand, how aerodynamics offers resistance or drag?
There are two types of drag – Friction and Pressure. Friction drag is due the friction between air and the surface of the object which means more the streamline object lesser will be the friction drag where as pressure drag is due to pressure difference between front and back of the car, as the air flowing over a car leaves a low pressure region at the back relative to the front. This pressure difference multiplied by the effective area of the car gives a force opposite to the direction of motion of the car which is known as pressure drag.

Here is a video to help you understand drafting more easily: 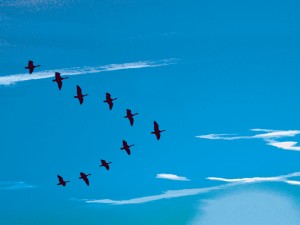 No, the concept of drafting existed in nature way before humans could notice it.
Have you seen birds moving in V formation?  The V formation greatly boosts the efficiency and range of flying birds, particularly over long migratory routes.  In a V formation of 25 birds, each bird can achieve a reduction of drag by up to 65% and as a result increase their range by 71%.

NASA also exploits the concept of reducing friction drag in a little different way. Notice the front of the space shuttle as shown. You could find that on one hand where most of the supersonic aircraft have a very streamlined nose, space shuttle have a very blunt nose. But why? 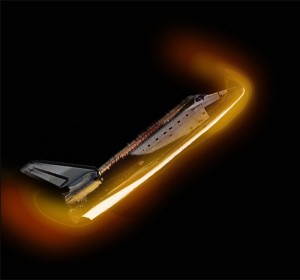 Since if shuttle have streamline nose the air will flow around the body. Now as the high speed air flows around the surface, it tends to heat the surface. As space shuttle re-enters the earth atmosphere, the resistance offered by air is so high that it can heat the surface of  shuttle above 3000 degree Celsius and can result in complete meltdown of wings. So what NASA’s engineers did is that they designed the shuttle with a blunt nose.

Blunt nose creates a envelop of low air density around the aircraft or deflecting  the air away from the aircraft (as shown) and thus reducing air friction and hence the temperature of the wings. So, you can say that wings are in draft to nose :P.

That’s it, this is all about drafting. So, whenever you jump on highway with your car, try to feel this effect, but don’t get too close because your journey may end up in the hospital.

Also, did you seen any other examples of drafting? Do let me know in comments!