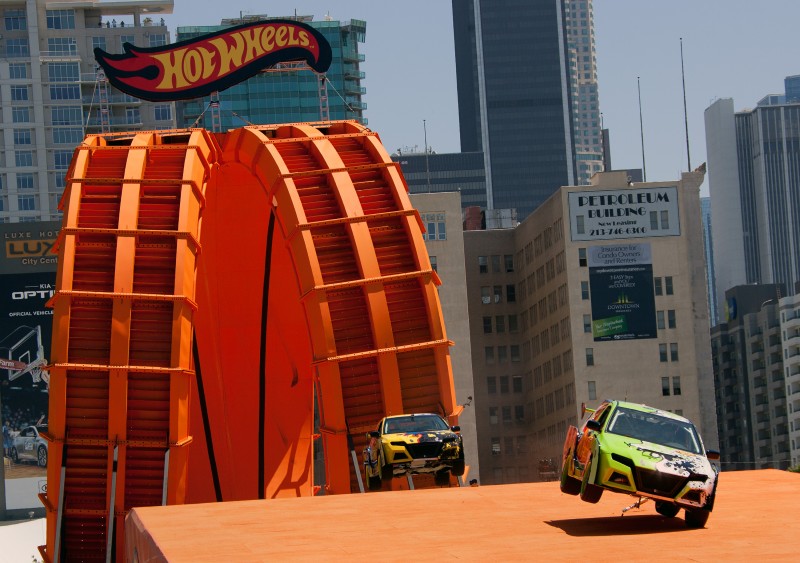 I confess, I was a die hard fan. Who am I kidding? Give me a kit now and I’ll end up spending hours making my own permutations to the already uber-cool tracks and crashing the gorgeous cars all over. Hot Wheels is the match that ignited the passion in most gearheads when they were young. The thing about such childhood passions is that inevitable and unshakable belief that these toys could be actually made. Yeah, it fades away in most of us but some never get weaned off it. Here I was, bored, skimming the www and then… Oh the delight! It was almost as if I’d met Superman, a group of “engineers” were actually crazy enough to go ahead and replicate all my childhood dreams. Real life Hot Wheels stunts. Need I say more? Corkscrews, Wall Runs, Double Loops and Jumps, all in a real self powered car with a real driver in it.

Smashing cars and world records all over, Team Hot Wheels have come up with an array of stunning visuals and impossible stunts. Engineering these cars and tracks and actually accomplishing these stunts isn’t short of an automotive marvel. The beautiful management of the forces by the suspension system in the corkscrew when the entire weight of the car landed on just the rear left wheel and it still somehow remained intact does call for a standing ovation or maybe a loud cheer and a choice of swear words.
This level of perfection was not the outcome of an experiment by a group of enthusiasts but work done by a group of brilliant engineers who developed and tested to the absolute limit, some of the most advanced and technically sound vehicles on the planet. Combined with a group of fearless and exceptional drivers they come up with this :