The time is 8am in Brescia,Italy. Augusto Turati, secretary of the national fascist party officially inaugurated it. 77 drivers battling head to head and at the end of 1628km, only 55 drivers made it to the finish line.

As the race commenced, Aymo Maggi, the local talented favorite, along with Bindo Maserati (one of the 5 Maserati brothers) took the lead in a ISOTTA FRASCHINI 8A SS, a luxury Italian carmaker back in its ripe days. But then just 30 minutes into the race and the ALFA ROMEO RL SS took a whopping 14 minute lead against the Isotta .

The ALFA even passed Fernando Minoia’s OM 123, an unparalleled legend of his time. After 587km, Brilli-Peri in his ALFA still held onto the lead averaging a 106.8kmph. But Peri stretched it too far and had to retire mid-way through due to a blown engine. This sent 25000 viewers ecstasic as they screamed louder than Minoia’s OM 123 as it swooshed past the overly-dominant ALFA.
6 tyre changes, heavy competition from LAMBDAS of Strazza and even the Isotta of Maggi and after a gruesome 21hr 4min and 48s, averaging a 77.68kmph, Minoia’s victory made the Brescians go wild- literally showering flowers on the cars which overlooked the track and crowding around the OM to get a share of the victory lap with the Schumacher of their era.

If you’ve come this far reading my rather “exciting” commentary, (presumably at the edge of your seat) , then you just re-lived the 1st edition of the “THE WORLD’S GREATEST ROAD RACE”, MILLE MIGLIA!

MILLE MIGLIA, yes say it again and let your tongue roll (read as millay mi-leah). It sounds like a sensous Italian woman with a beautifully ribboned summer hat who’d smile at you endlessly while floating on a Gondola. Truth be told, the Italian language indeed is very smooth flowing.Anyway, the literal translation of the Mille Miglia is a “1000 miles”.

This 1k mile race is not around a purpose- built race track but rather across some of the most serpentine and scenic “autostradas” Italia has to offer. The drivers have no pit crew, no team radio, no fancy traction control or even safety barricades at the cliff edges. Also noteworthy is that this is one of those very few races in the world where the drivers can experience a large spectrum of nature’s uncertainty – from rain to clear skies in one part  to dense fog and even snow in the latter part of the race, it takes a huge toll on the engine and more importantly the driver.
Point A and B typically are two Italian cities and the race involves travelling back to point A without tracing back one’s path.

As on public roads, you’ll even find usual traffic flow as the race unfolds, and as there are no grandstands to view it from, the crowd peeks into the race action live from ground level, literally narrowing down the width of the road for the driver to drive on, just to get a closer look. 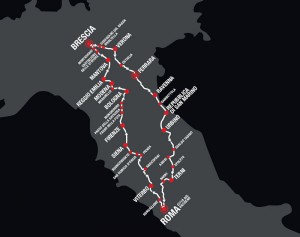 A vivid Mille Miglia follower in a documentary said that it’s not the car sliding off the cliff or crashing into the traffic that’s frightening, but rather the children that may suddenly run across the street around a blind corner or the fans getting closer to the race cars that comes of as a real threat to a driver.
But the inevitable happened in 1957, the 14th edition of race. Alfonso De Portega‘s left front tyre of his ferrari blew while doing a 240kmph, killing himself and his co-driver and 10 spectators. This lead to the Italian government banning all forms of motorsports on Italian public roads.

But the spirit for motor racing and the lust for “bellissima” cars would go undying, and so from 1977 onwards, the race was restored and re-named as MILLE MIGLIA RESTORICA. A lot of changes with respect to racing was made and drivers celebrate the classic history through parades. The race is stretched out for 3 days but the distance of race remains the same. This year’s Mille Miglia is held from May 17th to 20th in its rightful birthplace, Brescia.

So here’s my confession : Writing the article is a way of shedding my pain for not physically being where I yearn to be at this time of the year. The burning desire to witness the tradition of “sealing” the participant cars with a metal tab by the judges (which follows the traditional rites of the sealing ceremony) and hear those timeless classics roar in the heart of a country that’s passion for automobiles is understated. If you’re still blurry about what’s at stake here, let me just shed light on this year’s participant cars –
Alfa Romeo, Bugatti, Austin, Bentley, Mercedes Benz, Fiat, Aston Martin, Lancia, BMW, Maserati, Jaguar, FERRARI..  The list is endless, and I just named the well-known ones. Of the 1355 participants requesting to enter the race, 384 of these will fight for glory. ( Well, not as hard-fought as the olden days because of environmental and safety protocols and all that boring routine government has to follow. My frustration on this subject was well depicted in my previous article so I’m not going to elaborate more )
The most exciting part for me is this- the organizing committee decided to only select cars between the 1930 to 1952 age bracket, and that includes my personal favorite – The ALFA ROMEO DISCO VOLANTE ( #alfaromeo official also confirmed through instagram).
Yes, you can drool in private now.

All in all, it’s an ultimate feast for all six senses and especially for the vintage car enthusiasts like myself. There’s something very raw about their power and functioning that breathes a fire in my belly. It’s a gathering for the true car lovers, for the true ALFISTI, for those who’ve grown up reading/dreaming about these classics and for the car-connoisseurs. In this side of the world, age is just a number. To emphasize on this, a few children couple of years back painted their perception of the Mille Miglia while at the race .(A subtle method for mums and dads to enjoy the event if you know what I mean) . One girl had this to say-
“Today the town turned into a toy-shop. Noises, flags, songs and people out on their balcony. The Mille Miglia passes by and hearts are happy and beat stronger”.

Comprehending what a 10 year old girl perceives of this event, it made me feel like a child. I’m happy.